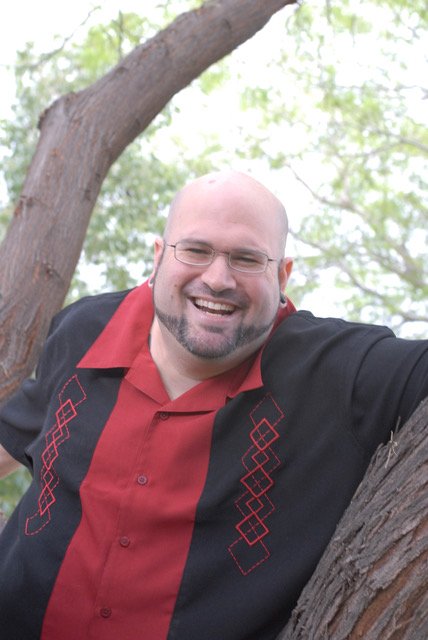 Cliff Swain-Salomon is an off-the-loom seed bead weaver known for creating non-traditional jewelry shapes and pushing the boundaries of color exploration. After injuring and losing use of both of his hands for over three years, he began beading when a friend recommended he try it as part of his hand rehabilitation therapy. Once he started, he was hooked.

In all of his pieces, Cliff integrates over 30 years of study in multiple fields, including graphic design, painting, sacred geometry, and chromotherapy, as well as apprenticeships with several medicine men and women.

He has exhibited his work internationally, including at the Toho Bead Galleries in Osaka and Tokyo Japan. Several publications have featured his jewelry, including Beadwork Magazine, Facet Jewelry, Bead & Jewellery UK, Beadworkers Guild Journal, and Bead & Button, to name a few. Cliff’s beadwork has earned him several awards—he was the grand prize winner of Bead Dreams in 2018, where he was chosen for the People’s Choice Award, and he also received the Facet Jewelry Reader’s Choice Award in July 2019 and Judge’s Award in November 2019. His work has been featured in ad campaigns and in a blog article for The Museum of Beadwork in Portland, Maine and Toho Beads in partnership with Bobby Beads & Starman. Toho Beads invited him to be a featured artist for their 2019, 2020, and 2021 Toho Bead Challenges. He is also a permanent ambassador for the Bead Worker’s Guild and International Beading Week, as well as the international tutor for Melbourne, Australia for 2021.

Cliff teaches beadweaving at various stores, for bead societies, and for retreats internationally. Before becoming a full-time artist/teacher, Cliff had worked as an instructor for a college of natural medicine, as a chef, and had held a private holistic medicine practice. He is married with a 4 year-old daughter and lives in California, near San Francisco.

This stunning necklace is a nod to the art deco peacock jewelry popular in the 1920s. The focal is a German glass cabochon with a gem-quality flameball pearl gracefully suspended from it and surrounded by a precious metal crown made of bugle beads. The two feathers have Preciosa crystal eyes, and the neck rope is composed of Preciosa pearls and True 2 firepolish beads. Throughout the ages, peacocks have symbolized rejuvenation, royalty, honor, and integrity. They are also a symbol of beauty, love, and passion.

To create the different elements of the piece, several stitches are used, including a variation of St Petersburg, Peyote, RAW, flat half spiral, fan stitch, Albion, and a few other combination stitches. Please know that Albion, the St. Petersburg variation, half spiral, and fan stitch will all be taught in class. A strong foundation in RAW and peyote is required, as they are highly important prerequisites for this class.