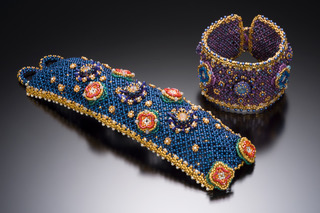 Galla Placidia Cuff was inspired by the ceiling mosaics in the Mausoleum of Galla Placidia in Ravenna, Italy. Ravenna is one of my favorite towns in Italy. It is known for its mosaics and is a UNESCO site.

Galla Placidia was the daughter of emperor Theodosius I (379-395). She was given her own
household while underage and she became financially independent. Galla was a major force in Roman politics. She was queen to Ataulf, king of the Visigoths and after his death she briefly became empress to Constantius III, and Valentinian III. She was a devout Christian and patron of religion. She was involved in the building of several churches in Rome and Ravenna. She is not buried in the mausoleum but was responsible for its construction. The design has one cuff that is wider than the other for those of us who like “big” jewelry. Components are made separately and attached to the cuff. Stitches included: Circular peyote, tubular peyote, flat Double Right Angle Weave.